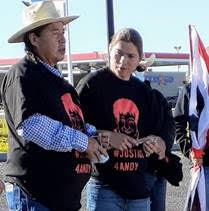 Angelo Sage begins as a part-time organizer this week for Justice for Andy. He is currently a sophomore at Central Wyoming College with a double major in media and business and plans to graduate in May with an associate degree. He has been inspired by the Black Lives Matter movement as a means for getting justice and police accountability for Indigenous people. Angelo, age 22, is Northern Arapaho and lives on the Wind River Indian Reservation. Angelo is the first paid employee for this work. All others, including me, have been volunteers.

Angelo, pictured on the right, is with his grandfather, Allison Sage, as they prepared recently to give the blessing before the 2nd Anniversary Memorial Walk for Andy Antelope who was killed at Walmart by a Riverton police officer on September 21, 2019.

Angelo led the Memorial Walk to the Riverton City Park, with chants and participants carrying banners and signs. At our request, there was no police presence. We stayed on the sidewalk and self-marshals assisted at street crossings to help assure safety. Nothing negative happened, and several driving by gave a friendly honk of their horns, thumbs up, and waves. As we expected, security was not an issue.

It could have been the same at Central Wyoming College on August 13, 2021, for the People’s Theater Inquest. But persons opposing the event and a real inquest generated fear that led to Central Wyoming College to have uniformed law enforcement present that we opposed and for which we saw no need and some, in fact, found intimidating. But to add insult to injury, this week the Riverton Peace Mission received an invoice for $500 from Central Wyoming College for security, stating that the total cost had been $760, but with $260 being credited.

The Wind River News this past week had a second article about the Memorial Walk that covered what the speakers said. I am hoping that the same article will run in the Riverton Ranger, that shares the same publisher as the Wind River News, to help counter the earlier biased negative story that seemed to promote division and distrust about what is meant by Justice for Andy. But while differences in strategy may emerge, we all want the same: Justice for Andy and police accountability for Native Americans.

Over the next few weeks, we will need to step up our efforts to raise funds for our continued work for Justice for Andy and police accountability. We are the resistance, and it costs. I ask that you think about how you can help. Your financial contributions matter. Checks may be mailed to PO Box 255, Riverton WY 82501 or donate online at www.rivertonpeacemission.org.

Fear not. Be bold. Build relationships. Be humble. Do justice.