Jordan Dresser, Chairman of the Northern Arapaho Business Council (NABC), spoke at the Memorial this past Tuesday saying, “What happened to Andy Antelope was so unfair at so many levels.” To hear all the speeches at the 2nd anniversary memorial of the police killing of Andy Antelope, listen to this YouTube filmed by Darrah Perrez on behalf of the Native Memory Project:  https://youtu.be/WOnEvSp8VHM  Other speakers included NABC co-chiar Lee Spoonhunter, Councilman Stephen Fasthorse, and State Senator Cale Case.

Nearly 50 people completed the Memorial Walk from Walmart to the Riverton City Park with chants led by Angelo Sage, while 75 were at the park to hear the speeches and to enjoy pizza (Andy Antelope’s favorite food) and beverages provided by the Northern Arapaho Business Council and cookies provided by Dr. Rodger and Barbara Gose. The Eagle Drum group opened the event at the park. Indigenous healing blessings were offered prior to the walk and at the park. They ran out of t-shirts, 54 distributed in all, that were provided by the Wyoming Coalition Against Domestice Violence and Sexual Assault that were produced by Mke Ute’s company, The Destiny Program in Fort Washakie. Allison Sage acted as MC for the event. Banners and signs reminded us that Andy’s life mattered and that no one is disposable. (See photos below.)

Anderson Antelope, Jr., began his remarks from prison to be read with, “County Attorney Patrick LeBrun has tried to quiet my voice by locking me up, but all it did was sober me up, and now I’m more dedicated than ever. Believe me that I have not given up getting justice for my dad.” Anderson wants us to know that he appreciates our efforts and asks that you not give up either. He urges you to sign the petition that can be found at www.rivertonpeacemission.org.

A biased article in Wednesday’s Riverton Ranger by Clair McFarland failed to focus on the Memorial, but instead printed quotes designed to create division about efforts for Justice for Andy and to paint the Antelope family as lesser than. In her interview with me, she asked if this was not the last hurrah. I laughed and assured her that it was not, although we know that the powers that be who are dodging accountablility would like for it to be. She also questioned me about why would we support someone like Andy Antelope who had a past, as if to say his life did not matter. 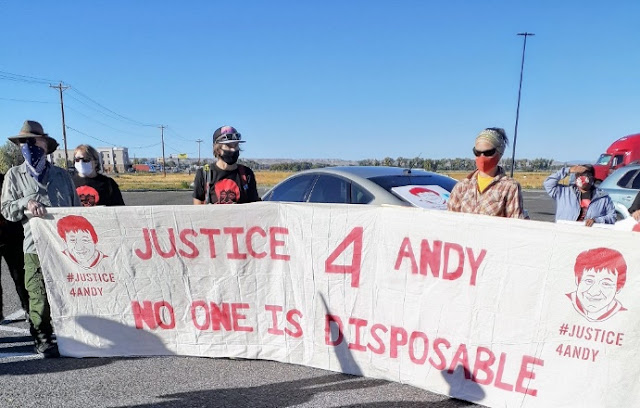