September 12, 2021
Reporting of the People’s Theater Inquest failed to cover its intent, which was to expand the narrative about the police shooting of Andy Antelope beyond he had a knife and was shot. The attached ad is another attempt to expand the narrative for a fuller understanding by those who did not attend on August 13th why an inquest and justice are needed.
Thanks to generous donations and talents, the ad below is what will become a full-page ad in the Riverton Ranger on Tuesday and in the Wind River News on Thursday. Here is what the ad says:
---
The police did not need to kill Andy Antelope.
On September 21, 2019, Andy Antelope was sitting at a picnic table outside Walmart, enjoying a brat he’d purchased at a veterans’ fundraiser trailer. Then a police officer showed up; 7 minutes and 14 seconds later, Andy was dead.
Our community deserves to know more.
A volunteer at the veterans’ fundraiser told the officer that Andy wasn’t causing problems and to leave him alone. Andy, who was disabled and intoxicated, asked the officer to take him to the hospital. When the officer tried to arrest Andy and Andy resisted, the officer did not deescalate the situation. The officer did not call for back-up or for medical assistance. Instead, he restrained Andy by the wrist and shot him in the head behind the left ear. A witness said the shooting was not necessary.
We need answers.
Why was the Fremont County Coroner’s 2019 request for an inquest blocked by the Fremont County Attorney and the Riverton Police Department? Should the officer who shot Andy Antelope still be in his position? Should he have been promoted? Were there not less-lethal alternatives? Why don’t the Riverton Police use body and vehicle cameras?
Read the full report from the Division of Criminal Investigation and sign a petition to support getting answers at www.rivertonpeacemission.org/justice-for-andy.
No One is Disposable; Andy Deserves Justice.
---
Memorial Walk, Tuesday, September 21.
4:30 Gather at Walmart. 5 pm Walk to the Riverton City Park.
6 pm Speakers and Food at Riverton City Park.

You may still contribute toward the Justice for Andy Campaign at the Riverton Peace Mission website or mail checks to PO Box 255, Riverton WY 82501. Our work is far from over.

Fear not. Be bold. Build relationships. Be humble. Do justice.
Blessings,
Chesie 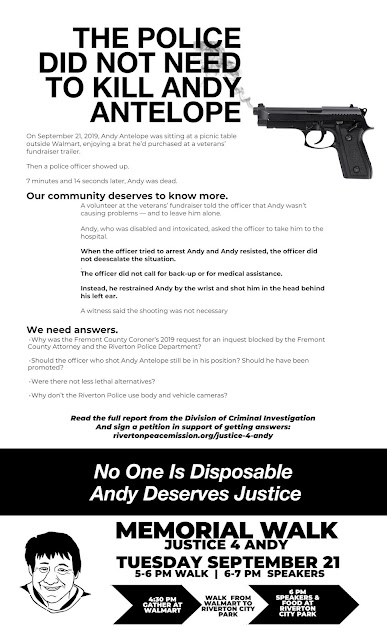